By Emily Carpenter—Almost a year ago, my friend Stacy asked me and another friend of hers I didn’t know to meet at Panera to talk about the possibility of forming a Mother-Daughter Book Club. Where did she learn about the idea? Pinterest. She introduced Marianne to me, and showed us the book, Her Next Chapter. All three of us had eldests that were in 3rd grade at the time—we were journeying together. On my drive home that night, I felt a tiny tectonic shift into a new territory of parenting. Acknowledging our 8-year-old daughters were growing and sponging everything up and now interpreting it through different lenses, deciding to form this book club as a touchstone for them is something for which I’ll always be grateful to Stacy. The girls were even more excited than we were. My daughter Zoe was drawn in because this meant she could “go out at night like a mom.” For the first few book club meetings, the moms had to do a lot of modeling of conversation, taking turns, asking each other questions, and so on. 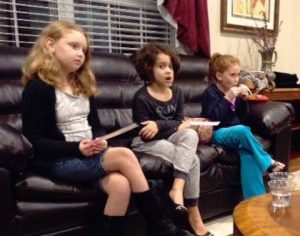 As we looked forward to each month’s meeting, the girls were paying so much attention to different aspects of the book as they read because they knew they’d get a chance to explore all of it at book club with friends. One really fun part was noticing foods they ate in the book and then each of us picking something applicable to bring to eat at book club! I think the most interesting thing we ate was the “cut-up” we made from Turtle in Paradise. In the book, all the kids bring something—anything!—to go into the “cut-up”: avocado, onion, papaya, potato, banana, pineapple, lime juice, and hot sauce. We duplicated it! (It was one of those things you’re not sure you like but you keep eating to figure it out.)

By the time we got to My Life with the Chimpanzees (our 7th month of book club), the girls wanted to answer the call to action Jane suggests at the end. They all decided to write to Hillary Clinton as a strong woman leader. (The theme for that month was Chapter 10 from Her Next Chapter: “Girls Are Leaders! Laying the Foundation for Future Adult Female Leadership”). We explained that just because they don’t hear back from her doesn’t mean the message won’t be read—she has lots of letters come her way. Well, to our surprise, two of them had their letters published on the Letters to Hillary Tumblr. You can see them here at #10 and #33.

Beginning in October, the girls asked to take the reins. Each one has chosen a month and a book and is writing the questions and leading discussion. As a mother, the part I cherish most is that, regardless of temperament on any other given day at home or at school, they always seem to arrive at book club open and willing to share. I have found our Mother-Daughter Book Club an invaluable resource in raising an empowered, informed, and educated daughter.

I daresay, this may go down as the biggest Pinterest-win of all time! 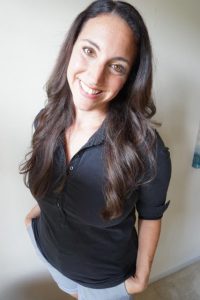 Emily Carpenter is a bit of a Jill-of-all-trades: blogger, organizer, digital media creator/ producer, and mother of three very different humans. A graduate of Penn State with a BFA in Musical Theatre, Emily also teaches music and performs, and most importantly never turns down a cappuccino with lots of froth on top. You can find Emily on Instagram and Facebook. You can follow her book club blog here.