Title IX and the Right to Wear Shorts to School

Title IX and the Right to Wear Shorts to School 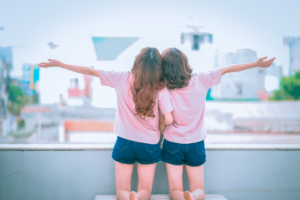 By Michelle Riddell—On a Monday morning in June of my 6th grade year, right after we said the Pledge of Allegiance and sang America the Beautiful, the principal came over the P.A. system and announced that several articles of girls’ clothing had been found in the library over the weekend, and anyone with any information as to how they got there was to see him immediately.

Our teacher, Mrs. Ross, was very pregnant at the time. Very pregnant. She was hoping to hold off giving birth for four more days and complete the school year, but it wasn’t looking good. We’d had a sub all the past week while Mrs. Ross was out with Braxton Hicks contractions, and after hearing the principal’s announcement about the clothes, she held her belly and winced. “None of you know what he’s talking about, right? Good, get your math books out.”

In the cafeteria at lunch, though, it was all anybody was talking about—and on the playground at recess, and in gym class, and in line at the drinking fountain, and on the bus. By Tuesday morning, rumors about the discarded clothes had snowballed into outlandish tales of forbidden lust and a secret rendezvous—more like 6th grade boys’ fantasies than plausible scenarios. The thought of someone not only undressing in the library, but then forgetting her clothes was too scandalous not to gossip about, and the principal’s scant announcement left plenty of room for speculation. Talk of the clothes crescendoed for four days without anyone coming forward, until Friday afternoon, when the final bell of the school year rang, and it stopped. Mercifully. For, had it continued, one of us would have cracked, and the truth would have come out.

On that Monday morning in June, when the principal made his announcement, my three best friends and I froze at our desks because the clothes found in the library—four skirts neatly folded atop the World Book encyclopedias, to be exact—were ours. We had taken them off in protest of the dress code during our afternoon library period, the Friday before. At that time in public schools, girls weren’t allowed to wear shorts—boys were, but girls weren’t—and we didn’t think it was fair. Knowing we would be having a sub that day, we wore shorts under our skirts and ditched the skirts, fully intending to retrieve them later. Being that our library period was late in the day, our act of civil disobedience went largely unnoticed, but that was fine. What mattered was, we bucked the system and got to wear shorts on a hot afternoon.

That four skirts found in the library was considered a serious matter surprised us; that everybody assumed something sinful had taken place was chilling. My friends and I hadn’t formally agreed to a pact of silence, but after hearing what was being inferred by our classmates, we had no choice. As the hours and days of that last week of school passed, and the rumors became more scintillating, confessing seemed like a dangerous option. While we weren’t guilty of what they were saying, we weren’t entirely innocent, either. Fortunately, the principal hadn’t been specific about the clothing when he first made his announcement, and no one had made the connection to our shorts protest. The best thing to do was lay low and wait for summer to save us, which it eventually did. We said goodbye to elementary school with its antiquated dress codes and never saw those skirts again.

Title IX of the Education Amendments, which prohibits discrimination on the basis of sex in any federally funded education program or activity, was signed into law in 1972, and yet, seven years later, when I was in 6th grade, our public school was still following a gender-based dress code. I’m not sure when, how, or why they finally updated it, but I like to think my three friends and I planted a seed of change. Whenever I’m discouraged by how far we have to go in our quest for gender equality, I look back on this time, when girls weren’t allowed to wear shorts, and I marvel at how far we’ve come—quite a long way, baby.

Michelle Riddell lives with her husband, daughter, and two dogs in rural mid-Michigan, where she writes, edits, and teaches elementary school. Her hobbies include trying to stay positive, convincing her daughter to taste different foods, and anything outdoors in wintertime. Find her work on Facebook @ReaderWriterRunnerWife and Twitter @MLRiddell.