GIVEAWAY for Bullied: What Every Parent, Teacher, and Kid Needs to Know About Ending the Cycle of Fear

GIVEAWAY for Bullied: What Every Parent, Teacher, and Kid Needs to Know About Ending the Cycle of Fear

Once upon a time, bullying took place on playgrounds, on school buses, and in hallways. At the end of the day, both the bullies and the bullied went home. There is no such “home” anymore—at least in terms of a safe retreat—because social media bullies can attack their victims online at any hour of the day. Bullies today seem to have so much more power than when I was a girl. My generation’s bullying was akin to BB guns, but the Internet is more like an AK-47. Cyberbullies who squeeze the trigger feel very powerful, and they are often quite disconnected from the consequences of their actions. And of course not all bullying is cyberbullying, which gets the most media attention. Kids peck at each other like baby chicks do, and if you’ve never personally witnessed that, then you might think it’s not so bad, but chicks will peck another chick to death.

The metaphor of the playground as jungle has persisted until quite recently.  Fortunately, heightened adult awareness of the real and serious suffering endured by bullied kids is fostering positive social change. Extreme and tragic consequences such as suicide have sparked a wide-scale effort on the part of adult professionals, parents, and schools to resist the idea that bullying is an inevitable and rather Darwinian part of childhood. Instead, many people have reframed bullying as a social problem—one that can be solved if enough energy is brought to it. It’s about time. 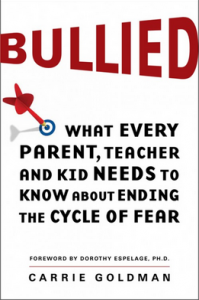 I’m proud to call one of this country’s preeminent experts on bullying my friend. Carrie Goldman, author of Bullied: What Every Parent, Teacher, and Kid Needs to Know About Ending the Cycle of Fear, might be familiar to you. Four years ago she wrote a post that went viral for her blog, Portrait of an Adoption, about her six-year-old daughter Katie being teased for bringing a Star Wars water bottle and backpack to school. Star Wars is only for boys, in case you didn’t know. Such was the message from Katie’s bullies, who, like so many children today, are some of the harshest enforcers of the gender roles hyped up by the greedy, profit-driven adult world of craven marketers and sexist media.

Why do children play by these rules? Because gender identity is rather concrete in young children and society reinforces for them that these standards are very, very important. Kids interpret these roles as fixed, not fluid, and they often seek the comforting structure of stereotyped roles to help them understand how to perform their gender properly. Unsurprisingly, they seek the approval of others by providing what they believe others want from them. This is a wonderful human adaptation—that children care about pleasing adults and doing what is “right.” But the problems are obvious.

One of the things I love about Bullied is that Carrie begins from a place of personal pain as the mother of a bullied child. I have always felt that the wounds received by one’s child cut more deeply than any received personally. But Bullied is not memoir. It goes beyond the personal story of one targeted child to tackle many stories of bullies, bystanders and victims (and their parents) in a way that combines narrative with current scientific research in an effort to understand why our culture is often cruel, and how it affects the families, schools and communities where our children struggle to find acceptance and safety.

I was really excited when I got to Interview Carrie for my chapter on bullying in Her Next Chapter. In our books, we both share the objective of going beyond descriptions of problems to offer practical tools to parents, teachers and kids for the developmentally typical—yet nonetheless challenging—struggles that kids face. Bullied speaks to everything from the influence of media on bullying culture, to the effects of bullying on the brain, to seeking help and restorative justice. 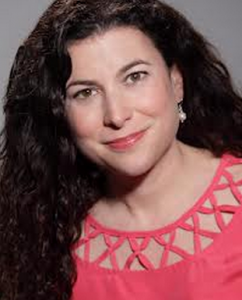 Of great interest to me these days is the need to take action at the bystander level, shifting that role to one of “witness” and eventually ally. Powerful stuff. When bystanders, who are often quietly harmed by what they see, and whose inaction can enable and embolden bullies, can be taught to be active (to be witnesses or allies) rather than passive, that can be a game changer. Carrie covers all of this, as well as many tips and techniques for dealing with bullying in the moment and seeking adult help when needed. For parents of bullied children struggling to get assistance from their child’s school, there is tremendous support amidst these pages.

I especially loved the parts of Bullied that address the aspects of our society that can encourage bullying, such as the needless and sexist gendering of toys and other products; the sexualization of children; and the influence of social media and advertising. These are my bugaboos too! And they should be yours. Although technically any child can be bullied, we know that certain kids are at greater risk, and they tend to be the ones who do not conform to norms, be they traditional gender roles, a heterosexual orientation, mainstream learning styles, mental health markers, physical attractiveness, or any of a number of norms related to race, religion, socioeconomic class, and family constellation.

I worked in schools for over 25 years, and I can tell you that bullying was the primary complaint I dealt with as a school psychologist and later as a school principal. Distressed students and distressed parents were a big part of my typical workweek. I wish I’d had Carrie’s book back then. But you can have it now! I am so pleased to host a giveaway for one signed copy of Carrie Goldman’s Bullied. Enter the contest via Rafflecopter below. The contest will run this entire week, and I’ll announce a winner on August 18th. Good luck, and please spread the word!
a Rafflecopter giveaway