I’d like to introduce my friend and colleague from across the pond, Tanith Carey. Tanith is an award-winning journalist and author who lives in London with her husband and two daughters. Tanith writes for a variety of publications across the world, including The Guardian, The Independent, The Daily Telegraph, The Daily Mail, The New Statesman and The Huffington Post, among others. She has also written seven books. Tanith’s Amazon best-selling book, Girls, Uninterrupted, published in March 2015, looks at the steps parents can take to build stronger girls in a challenging world.

I asked Tanith for a blog post to accompany a giveaway on the Her Next Chapter Facebook page for one signed copy of her new book, and here it is: 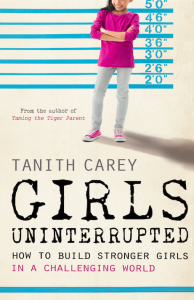 As the mother of two daughters, I know that my girls are not weak and defenseless – and neither are yours. But I also recognize that in a world where, by the time they are 16, half of girls want surgery to change the way they look, they also need help to work out why they feel this way.

Modern life may be evolving at breakneck speed, but our children still need to go through the same developmental milestones they always did to grow into emotionally healthy adults.

Girls, in particular, need parents to show them how to push back against some of the unhealthy messages in today’s culture concerning what’s most important about them and how they should look. The pace of change, powered by constantly evolving technology, is so fast, and the implication for our girls’ mental health so serious, that we can not simply hope to fire-fight problems as they crop up—whether it’s body self-hatred, anxiety and depression, or self-harm.

Of course, when I had my two daughters, Lily, 13, and Clio, 10, I assumed, at first, that these influences wouldn’t affect my girls. I imagined that if I didn’t mention the word diet around my daughters then they wouldn’t get the body image hang-ups that so many young girls are beset with these days from an increasingly early age. But I quickly had to wake up to the fact that no matter how many towels I pressed against the doorframe, I could not keep these messages out of my home.

Just as childhood has changing out of all recognition, we urgently need to change the way we parent our daughters too. The good news is that I discovered is that though we may often feel it, parents—and daughters—are far from powerless. Most important of all, I discovered that it’s essential we parents don’t bury our heads in the sand.

They may not have gone looking for it, but pornographic images still get through when kids misspell web address, see pop-up ads or get sent photo messages. Don’t miss the boat. As they get older, and get increasingly curious, it’s gets even more urgent.

By the age of 12, seven out of ten children say they already know more about sex than their parents think they do. As one mum told me: “If I try to discuss it, my 14-year-old daughter just rolls her eyes and says: ‘Why are you telling me now? It’s a bit late!’”

But, if due to the demands of jobs and busy lives, we buy into anything-for-a-quiet life parenting, and allow kids to spend hours with iPods, iPads and laptops, they might wander off into a cyber-world where we won’t be able to follow them. We are at risk of losing our vital connection with our children, which we need more than ever to help them navigate a world that has never been so challenging.

The tween years in particular—from around seven to twelve—are an important window. These years provide our best chance to influence our children and shape their values before friends and peer pressure start drowning us out. 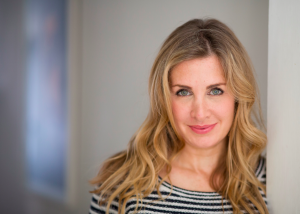 Just by becoming a more aware parent today, you can help protect your daughter against sexualization by making her more media savvy. In the two minutes you take to show your daughter how an image of an ultra-skinny model has been airbrushed, you’ve taught her not to try to live up to an image of perfection that doesn’t exist. By explaining where the pressures on your teen daughter to look sexy come from, and reminding her she’s worth more than that, you can mitigate the drip, drip, drip erosion of her self-worth.

But if we sit back and do nothing because we think there’s nothing we can do, the price is high for our children. A rise in eating disorders, self-harm, casual sex, teen pregnancy and underage drinking are some of the other side effects of growing up in up in a celebrity culture that puts an impossibly high value on looks and sexiness.

My daughters are worth so much more than that—and so are yours. Here are three ways to deal your daughter deal with the today’s pressures:

Selfies have become the new mirror. According to a recent study, 91 per cent of teenagers have posted one. There’s no problem, of course, if a girl has taken a few pictures every now and then, or recorded moments when she’s having fun. But if she starts constantly uploading them to social networks in order to compete for ‘likes,’ this suggests that she scrutinizes, in a, unhealthy way, the image that she is trying to project. On what basis does she want to be judged? Does she want to join an online pageant in which anyone can be a judge? Suggest she also take pictures that convey her personality, not just her looks. Help her to make a collage of the items that represent her, such as her hobbies and the passions that inspire her. Tell her it’s these things that make her special, not how she appears to other people.

Our children are growing up in a culture where anyone whose looks do not live up to the high expectations set by celebrities, Photoshopped models, and the tidal wave of size zero selfies is considered to be failing. We mothers need to recognize that from an early age, many of our girls feel locked in a constant beauty contest they feel they can never win.

Counteract this trend by training your daughter how to look in the mirror and concentrate on the good—how her body works and serves her, not just how she projects it looks to others. Make a point of valuing character over appearance in all of the people you know, including, especially, your daughter. Show her looks are just a small part of who she is and model that for her yourself.

Remind your daughter that, in the words of the late Anita Roddick, there are over three billion women who don’t look like supermodels and eight who do.

Meanness among children has existed since the words “No, you can’t play with us” were first uttered on a street, in a field, or anywhere children gathered before there were playgrounds. The sad thing is that nasty behavior among kids, particularly among girls, appears to be starting sooner than ever, even in preschool.

These days, girls know better than to organize overt campaigns of bullying. Yet, in a culture in which they are made to feel like they are not measuring up, they sometimes launch pre-emptive and under-the-radar strikes on female peers to temporarily shore up their fragile self-confidence. From the other side of the school walls, it feels like we have to no choice but to leave our children to it.

But there are steps you can take. Teach your daughter how to respond before she is devastated over being called fat, excluded by friends, or at the receiving end of sarcasm.  Explain that meanness says more about the person who says it than the person it is said to. Be a good role model in the way you treat others, and teach empathy so she is not tempted to resort to mean-girl bullying herself.

I am so pleased to host a giveaway for one signed copy of Tanith Carey’s Girls, Uninterrupted. Enter the contest via Rafflecopter below. The contest will run this entire week, and I’ll announce a winner on April 5th. Good luck, and please spread the word!
a Rafflecopter giveaway